A new era in Bulldog basketball is set to begin this winter as New Haven High School officially announced on Thursday, July 31st, 2014 that Mr. Bruce Stephens will step into the role of Head Boys Basketball Coach, a position previously held by his longtime friend and mentor, Al Gooden.  Gooden announced earlier this summer

Effective Immediately: In addition to the IHSAA physical, all athletes must have a signed “Concussion Acknowledgement and Signature Form” on file.  Both the physical form and the Concussion Acknowledgement form are required before an athlete can participate in any athletic event.  This includes conditioning, practice, game time, etc.  In order to make this process a little easier 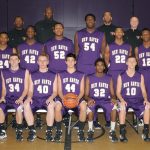 Congradulations to Coach Gooden and his New Haven Bulldogs for repeating as NHC Conference Champions for the 2013-14 basketball season! THe boys play again Saturday at Heritage and Tuesday at home versus Canterbury. Go Bulldogs!

Vote for the Bulldogs at http://www.hoosierauthority.com The voting is open until noon on Thursday and you can vote once a day. GO Bulldogs!

The boy’s basketball game canceled from Tuesday, January 7th has been rescheduled to next Tuesday, February 11th. The jv & 9th game will begin at 6pm followed by the varsity game.

Basketball vs Norwell has been postponed for Saturday, January 25. A new date will be posted as soon as the schools can get together and schedule.

New Haven versus Snider has been rescheduled for Tuesday, February 11with a 6:00PM tip-off at Snider High School. The freshmen and jv teams will play at 6pm followed by the varsity at 7:45.

No Events This Week

Events are added by athletic staff.
View All Events