Friday night’s home football game at New Haven against Frankfort was certainly one for the history books.

Not only was the game the first time in recent memory that Bulldogs have played Hot Dogs, it also marked the Bulldog’s second shut-out win of the season with a score of 47-0.  The loss snapped a five game Hot Dog winning streak cold.

Running rampant on the field offensively for the Bulldogs on Friday night was Senior Airiest Vasquez, who racked up and impressive 19 carries for 332 yards and 4 touchdowns against Frankfort in Week 2 Sectional action.  In one of his most explosive runs all season, Vasquez sprinted down the field for a 96 yard touchdown to snag the record for the longest rushing play in the Northeast Hoosier Conference in the 2013 season.

This was the 6th game this season that Vasquez has scored 3 or more touchdowns.  Last week, Vasquez was named to the All-NHC Conference Team as a Running Back for his outstanding contributions on the field to the Bulldogs.

In other offensive news on Friday night, a student surpassed his teacher on the field in the school football record book.  #13 Senior Jordan Hogue, who averages 83.5 receiving yards per game and has posted 17 total touchdowns to the Bulldog scoreboard this year, passed the 918 yard receiving milestone on Friday night.  On Friday, he caught 7 passes for a whopping 131 yards, which was enough yardage to surpass the previous New Haven High School record held by Chris Schenkel.  Schenkel, quite interestingly, is Hogue’s offensive receiving coach (watch New Haven Bulletin later this week for more on this developing story).

On the Defensive side of the football, D’Andre Smith was the one to watch on Friday night as he helped the Bulldogs clinch the shut-out over the Hot Dogs early on.  Posting 10 total tackles, 29 yards on an interception, and a 15 yard punt return, Smith showed his versatility on both sides of the football for his team when it matters the most.  Also helping Smith out while showing his versatility was #34 Adam Hoffer, who not only scored a receiving touchdown and a 2 point conversion but posted 9 total tackles and snagged his 4th interception of the year as well on Friday night.

In other developing football news, Junior quarterback Vance Shearer is nearing a significant milestone in his football career at New Haven:  Shearer is just 10 yards shy of surpassing the NHHS school single season passing record with Friday’s decisive win over Frankfort.  He could quite feasibly break the 10 yard barrier on this record this coming Friday night at New Haven when the Bulldogs take on Norwell.  New Haven played Norwell during Week 5 of the regular season and beat the Knights on their own turf 28-7.  In that game, Shearer completed 19 of 24 passing attempts for 300 yards.

Since that night during Week 5 action, Norwell hasn’t lost a football game; this means the Knights will ride into New Haven in the midst of a heated 6 game winning streak that has seen them defeat some of the heaviest hitters in the NHC, including East Noble, Homestead, and Columbia City.

While the Frankfort Hot Dogs went down without much of a fight, the Norwell Knights will be another story.  Be sure to head out to support the Bulldogs on Friday night, kick-off at 7 pm, or you can tune in right to New Haven Bulletin.com to watch the action live (and for free!) as New Haven vies for its first Regional berth since the 2001 season. 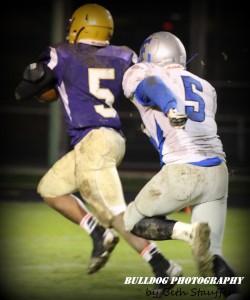