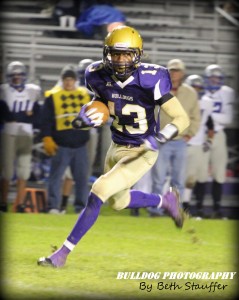 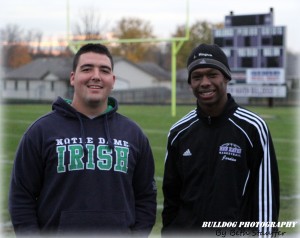 If one of the greatest compliments a mentor can receive is his protégé surpassing his/her original achievement, then New Haven High School Assistant Football Coach Chris Schenkel just received one of the best compliments ever.

During Friday night’s Sectional match-up against the Frankfort Hot Dogs, one of the receivers Coach Schenkel has worked with for the last three years snagged a pass that netted him his 918th receiving yard of the year, which is 37 yards more than Schenkel’s  original record of 881 single season receiving yards set during 2007.

When asked if he taught Hogue everything he knows, Coach Schenkel deflected much of the credit for his star student’s success back to Hogue.  “Jordan has always been well-educated,” said Schenkel.  “From the beginning, Jordan was a sponge and listened to everything that was said.”

From the looks of the impressive statistics Hogue put up week after week, Jordan was listening very closely.

Of course, the success or failure of a team is never totally just about one person.  “We have a lot of players that can make plays for us.  We’ve got Airiest (Vasquez) running for 60, D’Andre (Smith) hitting people.  It’s all good,” said Coach Schenkel with a smile.

While Schenkel and Hogue agree that the success of the Bulldogs is due in large part to the strength of the team as a whole, Coach Schenkel is quick to point out that Hogue’s leadership is an integral part of what gets the Bulldogs fired up beneath the Friday night lights.

Hogue credits Coach Schenkel with the excellent coaching he has provided with his ability to routinely contribute major plays for the Bulldogs; he averages over 83 receiving yards and 1.5 touchdowns per game.  Hogue is also within 1 interception of catching Bulldog Assistant Coach Troy Hoffer’s record for number of career interception catches.

“Coach Schenkel taught me route running and everything, using your hands like a receiver should, good footwork, and catching the ball.  He’s been a big help these past three years, and I can’t thank him enough,” said Hogue on Tuesday evening.

Jordan also credits who he refers to as his two biggest fans, his mother Mylin Hogue and father Jerome Hogue, for always being there to support him.  “After the games, they always have something positive to say to me,” said Hogue, adding, “They are my eyes in the sky from the stands for me.”

Bulldogs Head Football Coach Jim Rowland, who coached both Chris Schenkel and Jordan Hogue during their entire careers at New Haven, is rightfully proud of both of his player’s accomplishments, but he is especially proud of the attributes that they have in common that allowed them to reach a place in the Bulldog history book.

“The one thing I am most proud of in terms of both Schenkel and Hogue is that all of their achievements have come from hard work,” said Coach Rowland in a statement on Monday.  “Both players were talented, but both set themselves apart from others by good old-fashioned hard work.  They are both students of the game, and Jordan and Chris worked tirelessly to perfect their route-running.  Both players were extremely competitive and self-motivated.”

These attributes have served Schenkel well as a mentor and coach, and will no doubt continue to serve Hogue well in his future endeavors as he has currently has offers on the table to play football next year at both Ball State University and Bowling Green University as he pursues a degree in pre-physical therapy.

Jordan literally lights up when asked about his opportunities to play Division 1 football next year as his receiving coach of three years watches him and smiles.

“He really has a passion for football,” says Coach Schenkel.  “Jordan Hogue shines on the football field.  He really does.”

I think it is safe to say there are absolutely no hard feelings between these two about Friday night’s record-breaking, record-setting night on the field.  To quote something completely out of context but completely appropriate that Coach Schenkel said earlier in Tuesday’s conversation, “It’s all good.”